I’ve run a playtest game yesterday at a local RPG event called Dungeon Geek Weekend. I GMed the playted Adventure The Lil’ Lord Fiztroy Job, using the sample PCs Throk and Spanner, also the Halfling Rogue (that was called Vahn) and two PCs I created by my own, Fezair the Elf Illusionist and Gossamer the Gnome Loremaster. They had been called by Gertie and accepted the job.

While talking with the Lil’ Lord Fitzroy (Fezair and Gossamer were the ones that had gone for Negotiation), Gossamer introduced the Legend of the Return of the Demon Lord that every thousand years tried to get back to their world. By doing this, they discovered some of the Hidden Talents and Requirements. To be exact, he wants to Live a Adventure Worthy of Ballads, Have a shiny new Rapier and know to use it (I guess)!, Want to disable traps!, Love to fight Lizardmen, they are so IN, and Dislikes Darkness and Dirty. They also tried to cough more money, and were Successful with a Style in the process, working a 3-Invoke Resources Aspect.

Then, they layout’ed the Dungeon, with some Skeletons and Lizardmen, some Traps, a Golem and the Demon-Lord at the end of it. In fact, a kind of Medieval Era Megazord, a Fake Threat that was the only focus of Spanner during the preparation phase. Gossamer, although a Loremaster, would be the one that would “teach” Lord Fitzroy “how to fight” and about the “Demon-Lord Lore” (gaining time for the rest of the party to ready the dungeon).

Vahn set up the traps (except one Fake one of Darts, that Fezair setup) and obtained also a Gelatinous Cube and a Carrion Wurm, to be used as a way to maintain the Dungeon clean and as a “Random Encounter” if things were slowing down (or otherwise, as they’ll shown after).

Fezair helped by obtaining some clothes and putting some magic illusions on some orc mercs contracted by Throk to be the “Lizardmen”, and also provided the skeletons by talking with some contacts (including a Lich and a ex-Mage turned Idol). Also, in the setback he was the one that had to setup the Darts trap, but with this forgot to setup the Golem (I gave them the Fake Golem Illusion , but without Free Invokes, by a FP burnt by Fezair during the Tour).

Throk contracted lots of orcs to be the “Lizardmen”. In the Setback, while Throk was bringing the orcs to the Dungeon, to be ready, a Griffon had came and attacked the orcs, but with a Success with a Style in an Attack Throk defeated the Griffon bare-hands. In the end, he brought a Somewhat Battered Griffon as a extra Real Threat in the what we called Room 0, before entering the Dungeon.

As a convention game, I took a little less rooms, with 7 as a start, and including the “Room 0” at the Dungeon entrance, the Dungeon turned this way:

They had worked into quality instead of quantity and almost all the Rooms had more than 2 Free Invokes, Except the Griffon (that was a last time addition) and the Golem Illusion that Fezair forgot to work.

In Gossamer’s Setback (I gave each one a setback), the Lord Fitzroy choosed to “go” and Gossamer had to stop him, and so he played a gentlemen, but serious, swordfight against him (as a Contest) and won easily, so he provided the party the time for the last efforts.

Then, it was time for the Tour, but Fitzroy came with Contessa, his sister, and James, his butler (I chosed in my mind to put James as a second Cynic, but a more quiet one, as he Would like to see Fitzroy really grow). Throk very soon found about the Familiar hate Aspect on Contessa, and they were already aware of the unidirectional familiar feud from Contessa from the Lord Lawrence Fitzroy (they asked a first name, I gave). They felt that the Lord Fiztroy was a Childman, but the was a manipulative pain in the ass, ready to anything for power (including using the PCs).

The tour run very well, passing through the Griffon and the Skeletons, and the Darts. In the hole trap, he “disarmed” the trap (with Fezair using a little cantrip without Fitzroy or the others noticing). Then, Throk (that was the Guardian) simulated a shameful run to the Golem room, and they found Throk “hurt” (scening the hurt by the Golem Ilusion) and the Lord Fitzroy hit the Illusion, making the “Golem” collapsing with his rapier.

In Level 2, they had a problem: the water pool room was in the way, and then they choose to release the Gelatinous Cube as “Random Enconter” and accepting a defeat, making Lord Fitzroy run away. Then, I set the Twist: Contessa had chosed to show that all this was a setup (in fact, in my mind, she was trying to use the PCs to kill Lawrence and then she would frame the PCs), and found the “backstage” where Vahn was taking back the Gelatinous Cube.

They chose to create a illusion (by using the Hearing Bud to ask Fezair to do this) of a room to hold Contessa during the Tour. Even with the big difficult, he was Successful with Style, and Contessa was took by an Illusion of the Gelatinous Cube and the Carrion Wurm trying to devour her (in fact, the players said they were cuddling like little kitten on her) and she fell out. I gave them her as a Last Sacrifice for the Medieval Megazord Demon-Lord.

As the Contessa left a blood-colding scream, the PCs convinced Lawrence to stay focused in defeat the Demon-Lord, saying that their Cultists took her as a Sacrifice. So, they came to the Lizardmen Cultists (in fact, Orc Mercs) room and fought the Orcs, and them Fitzroy (even more focused and excited) had defeated the “Cultist” and obtained Shiny, yet Fake, Cerimonial Dagger.

And so, there was only the Demon-Lord, or so the Lord Fitzroy thought, as there was the Closing Wall Corridor. The PCs almost “was caught”, but Fitzroy had disarmed the trap (it was planted into a way he could find by himself) and “saved” the party from a squishy death (or so he thought).

And then all that was left was the Demon-Lord room… And the Medieval Megazord Demon-Lord with a Last Sacrifice (Contessa) and some “Cultists” (to make Fiztroy “win the day”). Fitzroy fought and then the Fake Dagger was melted (as it was made of sugar, that melted with all the head freed by the “Fireballs” and “Fire Pillars” and so built by Spanner). Then, Fezair used a illusion to make some runes appears over the Demon-Lord to dispel him (in fact, the selfdestruction words set by Spanner) and he invoked the words, dispelling the Demon-Lord.

Fitzroy saved Contessa (that was safely placed by Vahn into a fake cerimonial altar), that was scared like hell and now developed a Uncontrollable Fear of Jellies (eatable or not). Fitzroy was so impressed by the Tour (8 Successes, only a Defeat for the Random Encounter) that gave them a good money for the Tour… Part of them they spent with the orcs in a big party and the rest they split, with Spanner wanting to creat a new Megazord Demon-Lord, this time that could be split into Five Mini Demon-Lords…

They loved the setting and they really liked how to build the Dungeon and set things. They had lots of fun dealing with Contessa and thinking on if they should kill her or not or get into their feud and so. And also they had very fun while narrating how Fitzroy fought the Cultists and the Skeletons and specially the Demon-Lord. They also had many fun in all the process. We had also talked on suggestions in rules, that I’ll put into a revised copy of the DTl playtest.

Think the product is fun and give a twist for traditional Dungeon Crawl adventures, and has potential for other kind of pseudo-heist things, like a salaryman that would want to get into a cyberpunk run without armors or cyber (maybe with a locked deck) and so, and even with more “benign” kinds of tours, like a lord that wants to take her good-for-nothing son and teach him a lesson.

I’m really satisfied on the result of thre playtest… Still needs, although, to test some rules, like using flaws in the Hearing Buds and play another ideas in the game. Maybe I’ll do some more games of DTL. 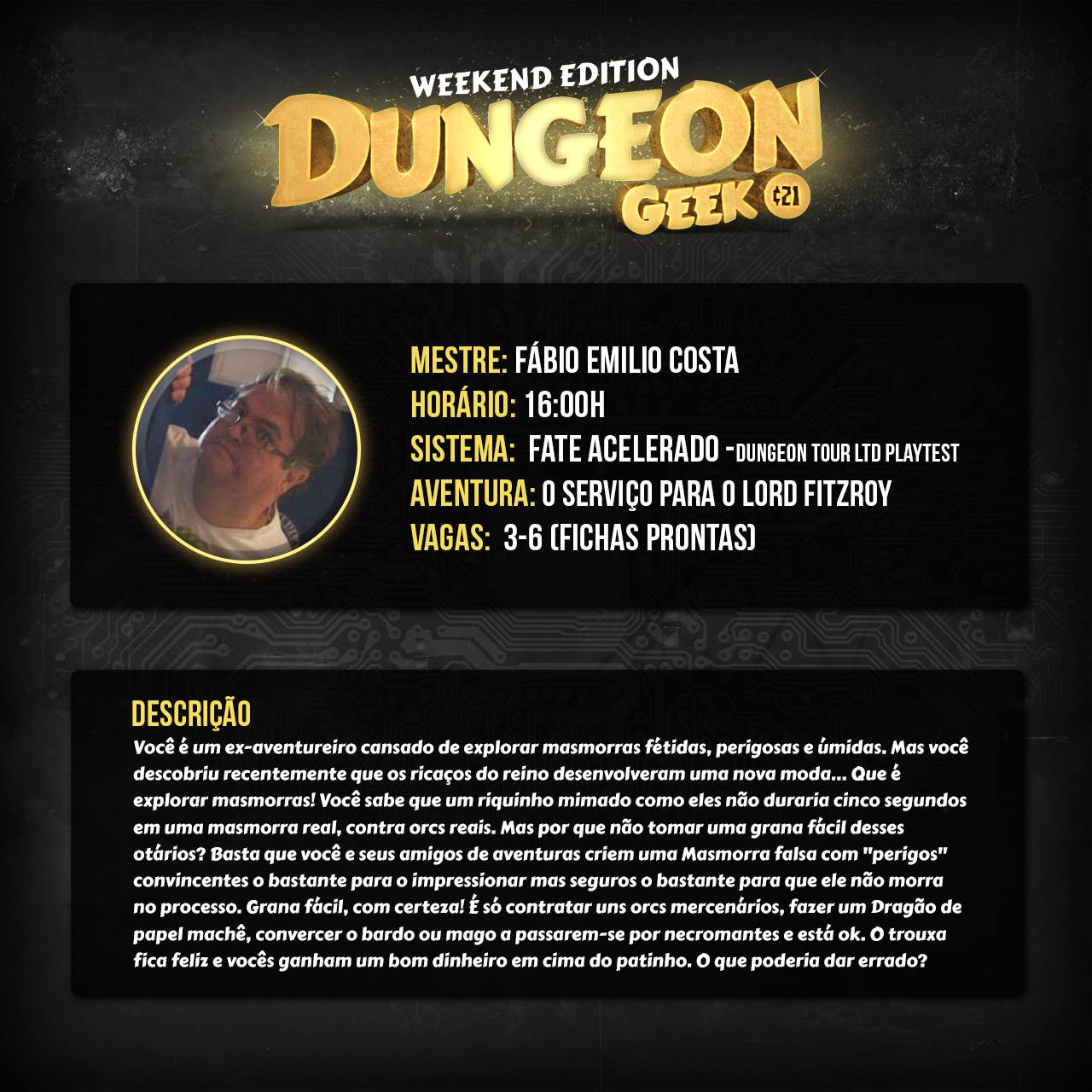 The Image Divulgation for Dungeon Geek Weekend (in Portuguese) 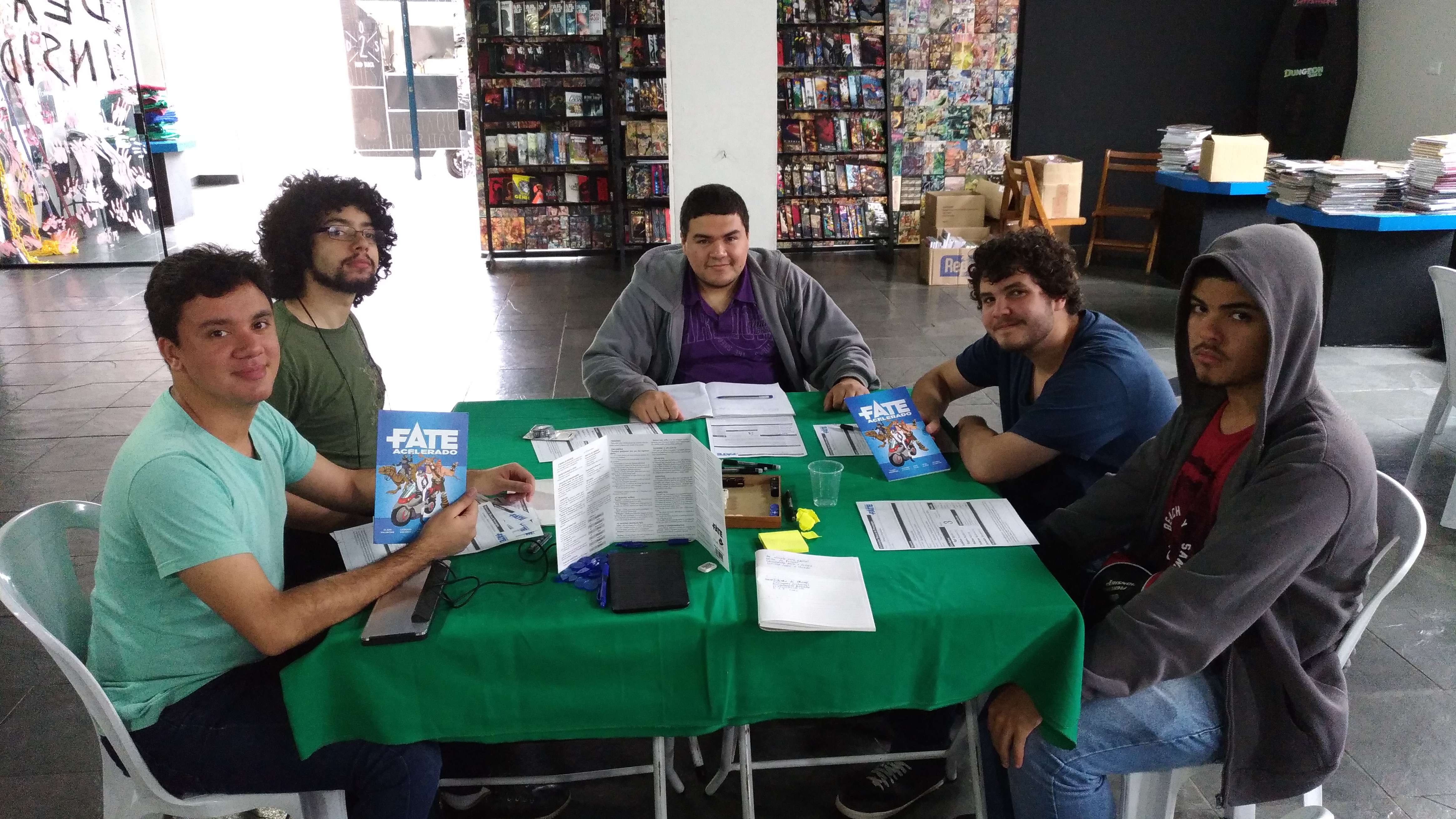 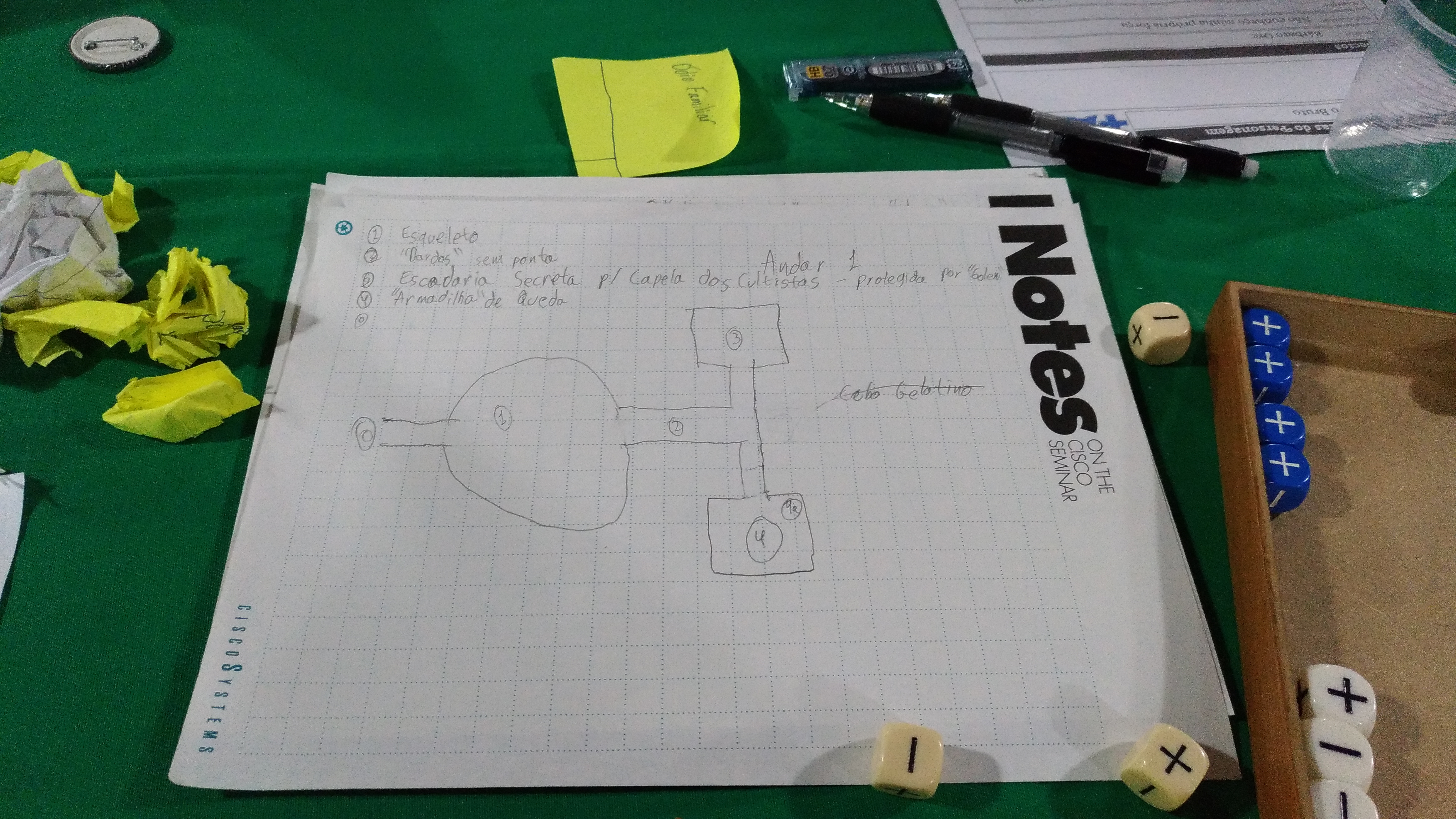 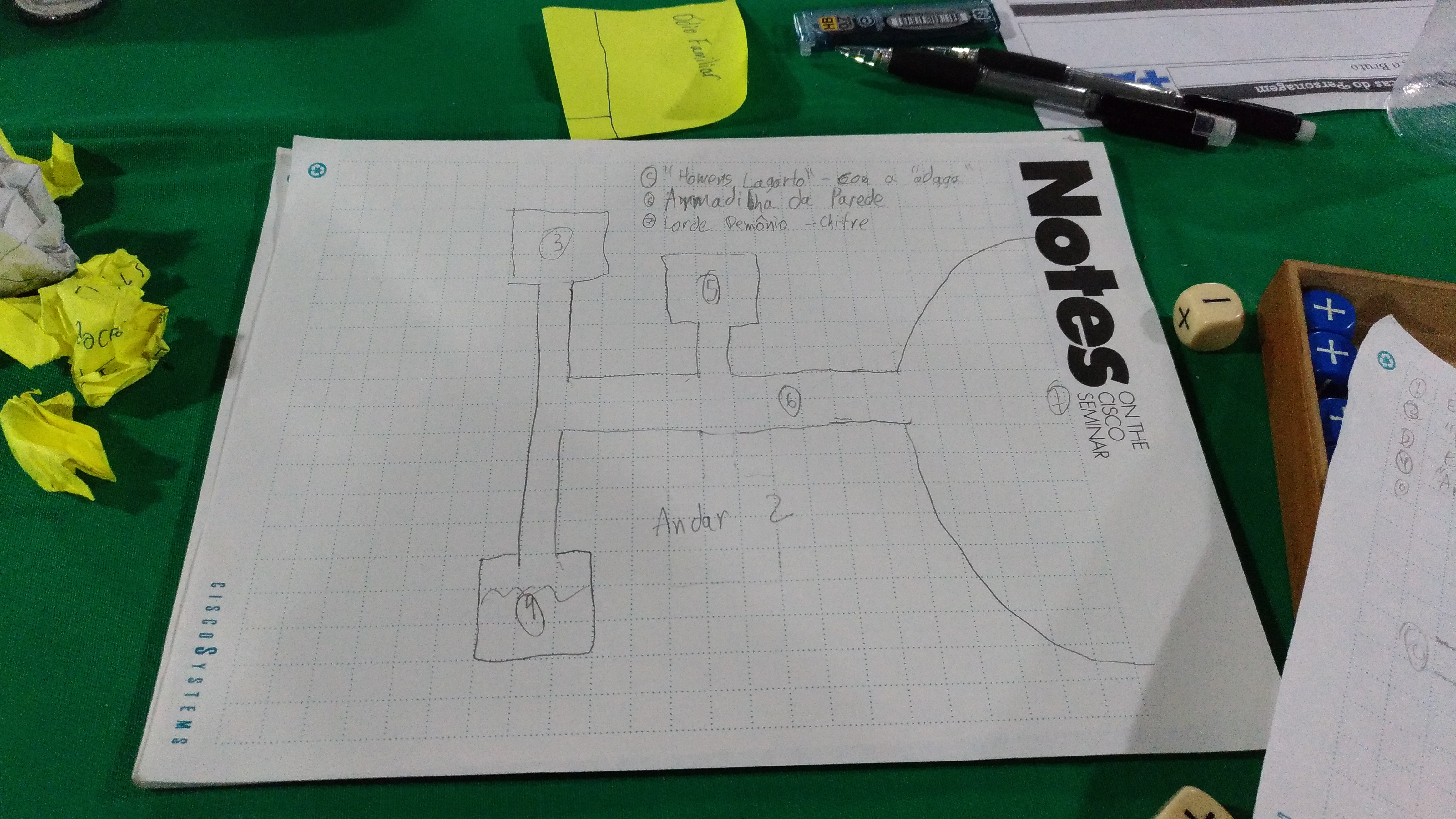 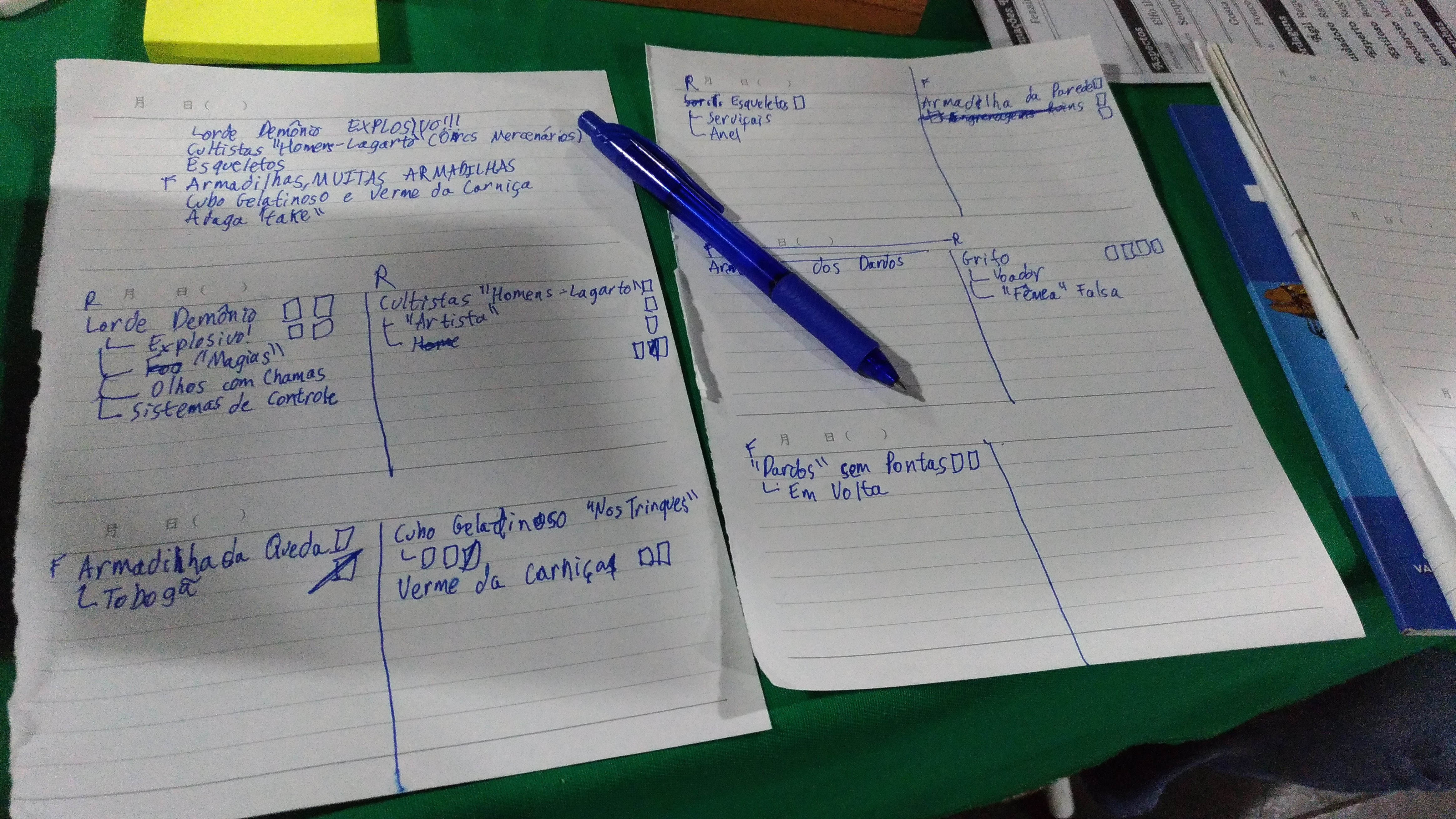